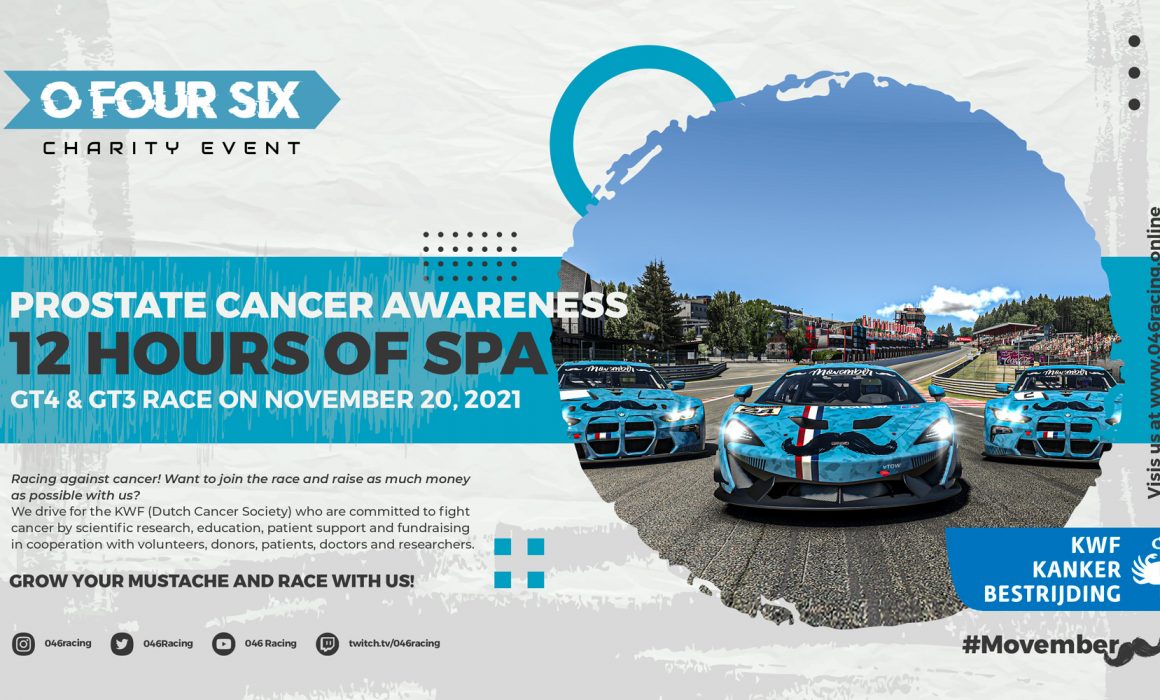 046 Racing is hosting a Movember online sim racing charity event on November 20 to raise awareness for prostate cancer. The Movember event is called '12 hours of Spa powered by O Four Six' and is a GT4 and GT3 race at Spa-Francorchamps in Belgium. Money is being collected for the KWF Cancer Fighting Foundation. Grow your mustache and race with us!

Movember
November, a month in which annual attention is drawn to men's health. Also called the month of 'Movember'. To create awareness for men's health and charity, many men grow a mustache. Many events are also organized to raise money for cancer research and other initiatives. Simracing Team O Four Six get involved too!

Sim racing event powered by O46 Racing - November 20th
046 Racing team organizes its first official Movember charity online sim racing event on Saturday 20 November: 12 Hours of Spa powered by O Four Six. The Movember event is organized to raise awareness for prostate cancer. 046 Racing wants to collect money in the coming period and during the race for a charity that conducts research into prostate cancer and better treatment. The proceeds of the event go to the foundation KWF Cancer Control.

The team, including sim racers Micky van der Burg, Rudy Versteeg, Jan van der Poel and I, will be riding with special Movember livery designs during the event. These are inspired by the Movember mustache.

Movember T-Shirts
You can also buy a limited edition Movember T-shirt! I made these designs especially for the charity event. Check them out here:

More information
For more information about the Movember charity online sim racing event, visit the 046 Racing website. Hope to see you at the race on November 20th! Grow your mustache and race with us!

Give an answer Cancel reply